Clearly there was already a connection based on these facts alone, and (if that wasn’t enough) I also illustrated that many ancient sites are aligned geographically as well, making it indisputable that they are connected somehow.

So, why does this matter to you? To find out, lets first take at trip to the lovely English countryside, where we find Silbury Hill…

The Silbury Hill monument in England is officially not classified as a proper pyramid; however, its smooth exterior hides the several man-made steps which constitute the main bulk of the structure.

Here are three intriguing facts about it:

… Maybe the nearby Stonehenge can connect some dots for us.

Though they are pretty amazing in and of themselves, I won’t bore you with the structural details of Stonehenge (you can find some of them for yourself here).

What I really want to show you is this:

Here you see Stonehenge in Google Earth. There are some circular burial mounds just northwest of the Stonehenge itself, where the yellow line is (more on the red line later in this post).

Putting a line straight through the center of the 5 mounds sees that the burial mounds line up to exactly 88.88 degrees (as shown below). Keep this number in mind for later – it probably won’t seem like a big deal now, but its significance will become apparent later on in this post. 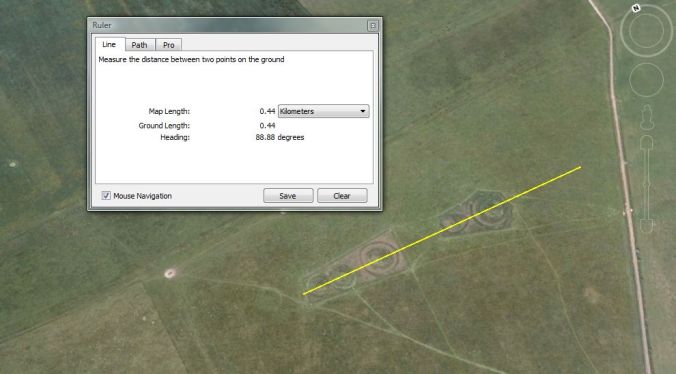 What happens if we extrapolate that 88.88 degree line?…

The 88.88 degree line from the Stonehenge burial mounds perfectly aligns with the Diquís Delta, a UNESCO World Heritage site in Costa Rica where hundreds of perfectly spherical stones have been found (pictured below).

The spheres range in size from a few centimeters to over two meters in diameter, and weigh up to 16 tons.

The spheres are scattered throughout the countryside with seemingly no explanation, and are so large and so perfectly rounded that they seem supernatural, with many of them on display in museums: 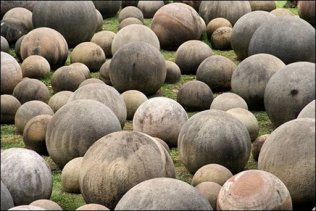 In the interest of keeping this post short I can’t do justice to the explanation for these spheres now, but just know that they are significant and keep them in mind as I’ll explain the incredible significance of them in a later post.

For now, let’s follow that 88.88 degree line some more and see where it takes us…

… And then to the proximity of Easter Island:

Easter Island is also a Unesco World Heritage Site, with stone statues each weighing hundreds of tons located all over the island.

The phrase Te pito o te henua has been said to be the original name of the island, which means “the Navel of the World”…

Want to know how many statues there are? … 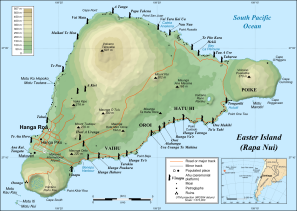 Remember the 88.88 alignment… Another coincidence?

Another curious fact is that it was renamed Easter Island (from its orginal name of Rapa Nui) in 1888. Make of that what you will.

It’s the top one here:

That straight line from Stonehenge passes through Teotihuacan’s Temple of the Feathered Serpent; New York, Troy, and Baalbek…

… And other significant places on that line are Washington DC, Philadelphia, Boston, Baltimore, Atlanta, New Orleans, and Syria, among others.

Let’s take a brief look at Teotihuacan and Baalbek first:

Teotihuacan – Temple of the Feathered Serpent

It is also clear from the carvings and altars on the pyramids themselves that the pyramid was used to make sacrifices to serpent and sun gods:

The temple was consecrated to the Mesopotamian god Bel, who was worshiped at Palmyra in triad with the lunar god (Aglibol) and the sun god (Yarhibol).

“Bel” or “Baal” (/ˈbeɪl/; from Akkadian bēlu), signifying “lord” or “master”, is a title rather than a genuine name, applied to various gods in the Mesopotamian religion of Akkad, Assyria and Babylonia.

In the court there were the remains of a basin, an altar, a dining hall, and a building with niches. And in the northwest corner lay a ramp along which sacrificial animals were led into the temple area. (Note that animal sacrifice was prevalent in most cultures around the world too).

So, both Teotihuacan and the temple of Baal were used to worship and make sacrifices to a sun god, and other forms of “gods” or a “master” (in the case of Baalbek also a lunar god).

Moving forward, what other temples can we find on the line connecting Stonehenge, Teotihuacan, and Baalbek?

Other Temples on the Teotihuacan-Stonehenge-Baalbek leyline

As mentioned earlier, that line passes through all 5 of the largest and oldest northeastern US cities, all of which have temples as you shall see in the following 6 examples.

1) House of the Temple, Washington DC

It is located about one mile directly north of the White House.

Notice the two Egyptian sphinx’s outside, I wonder what they’re doing there…

Inside there is a statue of Albert Pike; keep his name in mind as I’ll cover the significance of him in a later post.

The Masonic Temple is a historic Masonic building located directly across from Philadelphia City Hall. It serves as the headquarters of the Grand Lodge of Pennsylvania.

The Brooklyn Masonic Temple is regarded as one of the most outstanding structures in the United States. The cornerstone to this beautiful edifice was laid in 1907 as an exact replica of King Solomon’s Temple. Only two other Temples of its kind have been erected in the world, one of which is in Egypt.

In New York there is also a Masonic Grand Lodge (pictured top right), inside of which there is a huge gold statue of George Washington (more on him in my next post).

Located on the same street as where the Boston Marathon Bombing occurred:

The sign on the grass says “Scottish Rite Bodies”. Also notice the obelisk in front of the temple.

Apart from the geography and architectural symbols, another thing these Masonic temples have in common are their interior designs, which all follow a similar design (shown on the right)…

This design is also seen on the aprons worn by freemasons, in many varieties:

… As well as on their masonic finger rings:

Do you notice the sun, the moon, and the third entity in the middle?

It seems rather similar to the triad that was worshiped at Baal Temple doesn’t it…. that is: the lunar god (Aglibol), the sun god (Yarhibol), and Bel “the master”…

Speaking of Baal, you may have noticed the Temple of Baal in the news recently:

A look at recent news…

“NEXT month, the Temple of Baal will come to Times Square. Reproductions of the 50-foot arch that formed the temple’s entrance are to be installed in New York and in London, a tribute to the 2,000-year-old structure that the Islamic State destroyed last year in the Syrian town of Palmyra.

Here is Boris Johnson (the UK’s popular new Foreign Secretary…) unveiling the arches of the Temple of Baal arch at Trafalgar Square in London in April:

So lets get that straight: ISIS (more on them in a moment) destroys an ancient temple of sacrifice in Syria, and the natural response to that is to erect replica arches in London and New York… Makes perfect sense…

As an aside, here’s a TV show by the same name… The Fresh Prince of Bel Air… I wonder who that title is referring to…

Anyways, another big thing in the news lately is “Isis”, who have risen up seemingly from out of nowhere, and waging war in Syria…

Let me remind you now that (as I showed you in my last post) the Great Pyramid is aligned to the Isis (Canis Major) constellation, and that Isis is one of the most important Egyptian goddesses…

Lets take a closer look at the Isis (Canis Major) constellation, and its main star, Sirius.

I’m going to borrow some words from here. Worth reading that whole article, but for the sake of brevity here’s a snippet:

In Ancient Egypt, Sirius was regarded as the most important star in the sky. In fact, it was astronomically the foundation of the Egyptians’ entire religious system. It was revered as Sothis and was associated with Isis, the mother goddess of Egyptian mythology. Isis is the female aspect of the trinity formed by herself, Osiris and their son Horus.

Ancient Egyptians held Sirius in such a high regard that most of their deities were associated, in some way or another, with the star. Anubis, the dog-headed god of death, had an obvious connection with the dog star* and Toth-Hermes , the great teacher of humanity, was also esoterically connected with the star. [*Canos Major literally means “dog star”]

Wouldn’t you know it, a 25ft tall 7 ton replica of Anubis (the Egyptian god of the dead) actually made a little visit to New York in 2010… 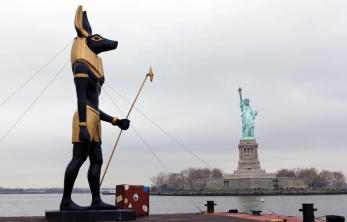 For what it’s worth, the Lady Liberty (i.e. the Statue of Liberty) standing in the background there is modeled after the same goddess known as Isis – who was also Venus, Aphrodite, Ishtar* (the wife of the false god, Baal) and Semiramis, the mother of Tammuz:

*Ishtar = “Easter”… Could this be where  Ishtar Island got its name?

The Sun and the Moon represent male and female energies of Osiris and Isis, respectively, and their son Horus is in the middle (the eye)…

With that in mind it should be clear by now that this same triad was worshiped at Baal by the Mesopotamian’s, by the ancient Egyptians, as well as by modern freemasons!

By the way, here is the All-seeing eye of Horus (Osiris and Isis’ son) as depicted by the Egyptians (note that the eye is central to the masonic emblem above):

Incidentally, could this be linked to all the one-eye symbolism in Hollywood and the music industry?… 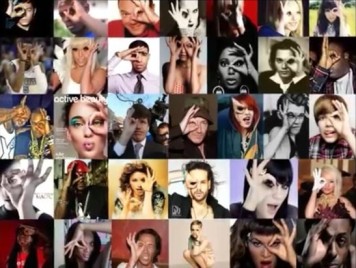 Lets take another look at that line… you know, the one with all the sacrificial and masonic temples on it…

Here are just some of the more recent events that have occurred along that line in recent history:

Do you think the sacrifices to serpents/Horus/Baal/”master”/”lord”/cookie-monster aren’t still ongoing today?…

That would be a good place to end this post, but before finishing I want to show you two things that will surely blow your mind, that I will cover more in my next few posts…

The location of where the twin towers stood coupled with the new One World Freedom tower align to the Orion constellation as well, just like the Pyramids at Giza, Xi’an, Teotihuacan, etc…

So, what places do we know that have domes and obelisks?…

The Vatican (left), and the Washington memorial in front the Capitol building (right):

Now, remember the number I told you to to keep in mind earlier…?

Line up the respective obelisks and domes on Google Earth and you get alignments of… 88.88!